As already mentioned, La Gravina rooms are located in the historic town centre, the best position for those wishing to visit all the local tourist attractions sites.

Gravina in Puglia rises at the foot of the Alta Murgia, at the confluence of the valleys of Lucanian pre-Apennines and it surrounded by green and pleasant hills rich in grapes and olives. The town boasts a glorious history of three thousand years. Evidence of this are the finds of the pre-Roman archaeological sites "Botromagno" and "Padre Eterno". The town is bordered to the west by the ravine "Gravina" which has given the name to the town. Indeed, geologically speaking, the word "gravina" indicates a depression of the ground caused by water erosion.

The town, firstly called "Sidion" by Greeks and then "Silvium" by Romans, had great importance thanks to a filling station created on the famous "Via Appia". With the fall of Roman Empire it suffered raids and robberies by Ostrogoths and Visigoths, which led many people to repopulate the caves of the subjacent ravine. In this way the memorable neighbourhoods Fondovico (or Fondovito) and Piaggio started to rise..

Gravina suffered also conquests by Byzantines, Saracens and, since the 11th century, by Normans. Thanks to king Frederick II of Swabia, who commissioned the building of a castle here, Gravina gained great recognition and became the general Curia of Puglia, Capitanata and Basilicata for the prosecution of trials. 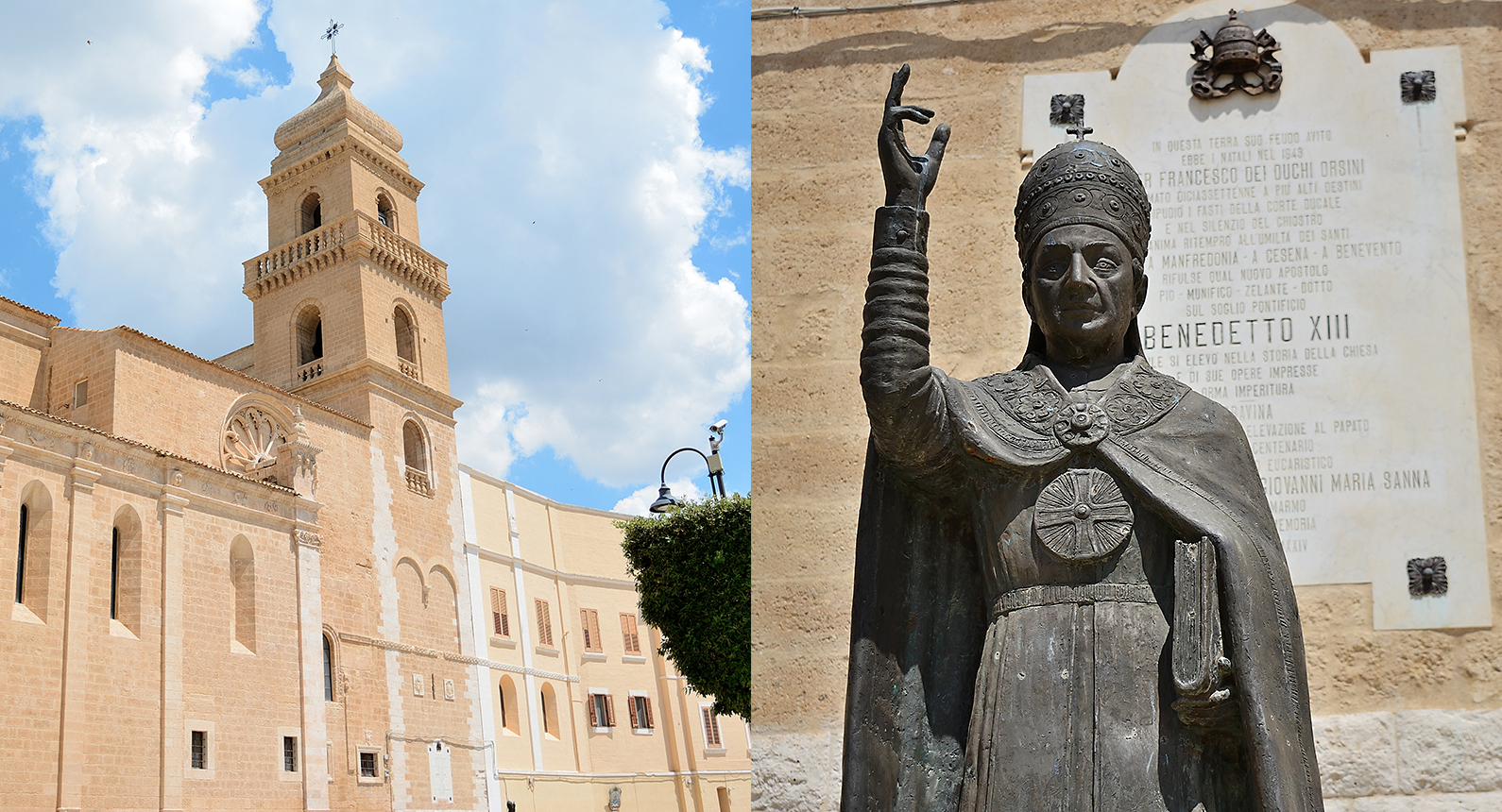 The Angevins replaced the Swabians and in turn were substituted by the Aragonese, who entrusted the county to the prefect of Rome Francesco Orsini, who raised it to Dukedom. Thanks to Orsini family, Gravina acquired considerable power and prestige. Undoubtedly the leading figure of this family was Pier Francesco, who wearing the religious habit of Dominicans, became Pope Benedict XIII.

The peculiarity of the town doesn"t lie only in the charming landscape of the "gravina", the ravine, but also in the majesty of its long history, in the wealth of its art and in the features of the old town with its corners, its prestigious buildings and its mysterious "gnostr" (peculiar cloisters).

Today Gravina, particularly rich in monuments and churches, is very appreciated both from a cultural and panoramic point of view, thanks to the breathtaking view on the ravine, the archaeological area of Botromagno, the rock churches as well as the fascinating landscape of "Difesa Grande" wood and the "Alta Murgia" Park.

The Cathedral Basilica is certainly one of the worth visiting places in Gravina, which was founded by Normans in the 11th century. With the construction of this extraordinary church, the Norman Unfrido d"Altavilla brought back to the town the episcopal seat that had been previously suppressed for war reasons.

The bridge "Madonna della Stella" is undoubtedly the symbol of the town. It was initially constructed at the end of the 17th century, although some believe that the bridge dates back to Roman age. Actually it appears for the first time in a notary deed only in 1686. The bridge was rebuilt by landowners, namely Orsini family after the collapse caused by the 1722 earthquake. The bridge is 37 metres high, 90 metres long and 5 and a half metres large. It was initially designated for crossing the ravine on "Botromagno" and for reaching the rock church "Madonna della Stella". Later the Orsini family wanted the bridge to serve as an acqueduct too, as a way to bring water of the "Sant"Angelo" spring to the town.

Near the bridge you can also visit the medieval bastion, ancient difensive walls whose construction dates back to 1344. In those times indeed Gravina was controlled by the King of Hungary, who ordered a further strengthening of the walls of the town.

The Orsini family commissioned also the construction of other buildings in the town such as "Santa Maria del Suffragio" and "Purgatorio" churches, the monumental fountain and Orsini palace in "Piazza della Repubblica". In the heart of the historic centre, in the "Villa comunale", you can find also the Monument to the Fallen and "Pomarici Santomasi" building, which dates back to 17th century.

Thanks to the will of the baron Ettore Pomarici Santomasi the building houses since 1917 the City Civic Museum.